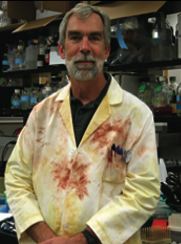 Although smallpox has been successfully eliminated through modern medicine, the original smallpox vaccine, a virus itself, has endless possibilities in research and biotechnology.

As a graduate student in the 1970s, Richard Condit was interested in the relatively new fields of molecular biology and gene expression. Now a professor of molecular genetics and microbiology, Condit decided to focus on molecular virology, and in particular, vaccinia virus, the virus used as a vaccine against smallpox.

“Viruses are interesting because they are the simplest of living things, and by studying how they grow, I can learn about how living things grow,” Condit says. “Also at this level, I get to know basic things about how viruses work and that’s where my focus has been all along.”

Condit says that the smallpox vaccine is not only an interesting subject, but it has a great social relevance; with the emergence of bioterrorism, there is a renewed interest in poxviruses, including both vaccinia and smallpox, spawned by the fear that smallpox will be re-released.

“In order to prepare against that possibility, the NIH is interested in improved vaccines and improved anti-viral drugs,” Condit says. “Our research leads to relevant information about these topics.”

“Rich is truly versed in both classical and modern genetic methods and uses them both to investigate biological processes,” says Henry Baker, professor and interim chair of the Department of Molecular Genetics and Microbiology. “Among vaccinia virologists, Rich is known as the godfather of vaccinia genetics.”

Condit says that his research and knowledge about viruses is only half of the reward.