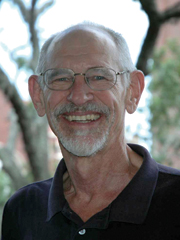 Ira Clark, a professor in the Department of English, is currently writing a set of essays to be turned into a book called Rhetorical Readings, Dark Comedies, and Shakespeare’s Problem Plays.

“Between 1598 and 1611, a great bulk of the plays we know about are satiric comedies, they’re really bitter, and Shakespeare wrote three of them,” he says. “I’m writing about these by approaching them through how rhetoric works within them.”

Clark is a renaissance scholar, particularly in the area of drama studies, with four books in his academic repertoire. His work, aimed at engaging discussions within the field of Renaissance studies, also provokes thought about drama of the time.

His first book Christ Revealed: The History of the Neotypological Lyric in the English Renaissance was published in 1982, and covers a term Clark invented: neotypological.

“It’s a way of interpreting the bible in that events in the Old Testament prophesy or predict things in the New Testament,” Clark says.

Three more books have followed: the second on the Caroline playwrights, Philip Massinger, John Ford, James Shirley and Richard Brome; the third, a more detailed analysis of the accommodation of Massinger regarding the sociopolitical issues in seventeenth-century England; and the fourth, titled Comedy, Youth, Manhood in Early Modern England.

“I’ve always had that interest in teaching the 16th and 17th century and Shakespeare, but when I finished my first book and articles on Milton and other poets, I started writing about drama,” Clark says. “And I was teaching it anyway so there were plenty of questions.”

“He has significantly gone against the critical grain to explore either the omitted or slighted career or genre in order to see how the ‘elite and dominant’ critical debates too often elude what can be learned from comedies or ‘minor’ figures,” says John P. Leavey, Jr., professor and chair of the Department of English.