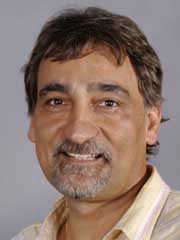 Although George Christou works in nanoscale dimensions, his work is creating huge possibilities for scientists around the world. In the ever-shrinking yet increasingly relevant world of nanoscience, Christou has emerged as a leader in synthesizing some of the world’s smallest magnetic materials. His work in single-molecule magnets, of which he is a leading expert, may have the potential to revolutionize computers by exponentially increasing their processing power.

In 1992, Christou and a group of scientists at Indiana University fashioned the smallest magnet ever created. Being a compound containing only 12 manganese atoms, the inner core of the magnet measured just one-half of a nanometer, or a billionth of a meter. Magnets of this size can easily crystallize into arrays of trillions of identical magnets. They can also be completely dissolved in many liquids and modified in valuable ways. Cell phones, televisions, medical equipment and credit and debit cards, not to mention the constantly shrinking world of digital entertainment devices, all rely on smaller and smaller magnets like the ones developed in Christou’s labs.

Over the past five years, Christou has published more than 150 articles pertaining to his work in single-molecule magnets and received grants from the National Science Foundation for more than $1 million. The majority of available information concerning the field of molecular magnetism can be attributed to Christou, and many young scientists in the field claim him as a mentor, co-author, or source of information.

His work has also proved influential in the study of quantum tunneling, in which a particle can violate the laws of classical physics by passing (or “tunneling”) through a high-energy, formerly impenetrable barrier. In fact, scientists the world over who study quantum tunneling and quantum magnets are likely to be using materials developed in Christou’s labs.