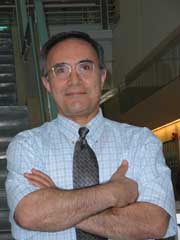 In 2000, the United States generated more than 150 million tons of construction and demolition waste and more than 75 percent of the waste was dumped in landfills.”This is enough waste to fill a 40-foot-deep landfill the size of the UF campus,” says building construction Professor Abdol Chini, director of UF’s Powell Center for Construction and the Environment.

Chini has performed extensive research on the reuse of concrete aggregates and wastewater generated at concrete plants in production of fresh concrete to minimize environmental impacts.

Jay Stein, dean of the College of Design, Construction and Planning, says Chini “has become a recognized authority, both nationally and internationally, on efforts to use concrete waste more effectively and efficiently, as well as deconstruction and reuse of building materials.”

Chini says the process of systematic dissemblance was unknown until about eight years ago, but now has become a new industry because of its popularity.

“Instead of the old practice of demolishing buildings and throwing their parts into a landfill, buildings are systematically disassembled with the hopes of reusing and recycling their parts for future construction,” he says.

Environmentally, the reuse of salvaged construction material preserves tons of landfill space, plus it reduces the demand for new material.

“The reuse of large, old-growth timber means that quantity of raw material need not be extracted from the Earth, transported to a manufacturing plant, cut, milled, treated, packaged and transported to a storage facility. The associated energy consumption and pollution would be eliminated,” Chini says.

Chini says that even buildings whose materials are not appropriate for material salvage can be deconstructed for 30 percent less than it costs to demolish them.

Organizations like the Environmental Protection Agency and U.S. Army Corps Engineers are beginning to embrace the concept, says Chini, who is working with the corps to develop strategies to deconstruct old military bases.

Chini has received more than $1.4 million in research grants from the Florida Department of Transportation during the last six years, has edited two books, published more than 70 papers and made more than 30 national and international presentations.