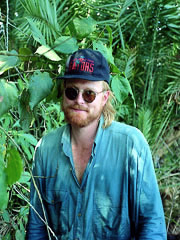 Colin Chapman spends as much time as possible in the jungles and swamps of Uganda. Although his primary research interests are in primates, his field research is much broader.
“The primates are found at the Kibale National Park in Uganda are of the highest densities ever recorded,” Chapman says. “And, unlike many areas of Africa, they are not hunted.”
But, like so many species in developing countries, the primates of Uganda are threatened by the demands of civilization.
Instead of focusing solely on how changes in the environment impact the primates, however, Chapman studies how primates interact with their environment and what those interactions could mean for the future of the forests.
“Dr. Chapman has an outstanding research and service record in conservation ecology,” says Robert Hold, Eminent Scholar and chair of the Department of Ecological Studies. “Beyond this core, he has made many important contributions to understanding tropical biology and primate ecology.”
Chapman is currently concentrating on the role fruit-eating primates have in the dispersal of seeds and regeneration of the forests. Chapman’s research has documented how fruit-eating primates carry a tree’s seeds far afield, either in their feces or by spitting them out as they eat. This process has extensive conservation implications, he says.
“Our research leads us to conclude that 60 percent of the 25 species of trees we sampled could be lost if all the fruit-eating animals were removed from the Kibale Forest,” Chapman says.