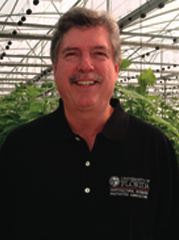 When plant researcher Daniel Cantliffe first came to the University of Florida in 1974, he created a model system for priming, or controlling absorption of water, in lettuce seeds at a time when priming was considered ineffective. Cantliffe’s system worked, and today almost all of the lettuce seed commercially used in Florida and much of the world is primed. From lettuce, Cantliffe initiated work on other crops including pepper, tomato, carrot, cabbage and celery.

Thirty years later, Cantliffe – now chair of the horticultural sciences department – is still working with dormancy in lettuce seed, but he also oversees The Protected Ag project on the cultivation of high-value vegetable crops for Florida producers.

The Protected Ag project aims to ease those challenges by developing a closed-production system in massive, ventilated, high-roof greenhouses – much like the ones in Israel and other Middle Eastern countries.

“The emphasis of my work relates to sustainability for both water and fertilizer, and strives to reduce pesticide inputs to a minimum,” Cantliffe says.

Cantliffe and his team have developed two half-acre experimental greenhouse operations at the Plant Science Research and Education Unit in Citra.

As part of the project, he has cultivated alternative crops for Florida vegetable producers, including Beit Alpha cucumber (a small, sweet-fleshed vegetable popular in Europe), Galia melon, baby squash, colored peppers and strawberries. These crops can be grown year-round without fertilizer runoff or pesticides.

“The quality of the products coming from the greenhouses is greater and extremely more valuable in the retail market,” Cantliffe says.

“The program is one of the most productive in regard to publications of any in IFAS,” says L.C. Hannah, a fellow professor in the Department of Horticultural Sciences. “It develops information at a rapid pace so that adoption by growers can be immediate, factual and economically feasible.”