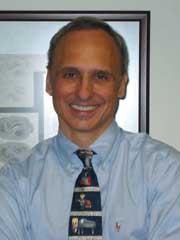 Much of Barry Byrne’s research career, first at Johns Hopkins University and at the University of Florida since 1997, has been devoted to developing treatments for glycogen storage diseases, particularly Pompe’s Disease, a genetic form of heart failure that often affects young children.

Glycogen is a complex material composed of chains of glucose molecules that is found mainly in liver and muscle cells. Persons affected by glycogen storage diseases have an inherited absence or deficiency of one or more of the enzymes responsible for forming or releasing glycogen as it is needed by the body.

Byrne, director of UF’s Powell Gene Therapy Center, has taken his pioneering laboratory research into clinical application. He is currently principal investigator on a pivotal protein replacement trial in critically ill infants with cardiomyopathy. Byrne is also working on a study to replace the missing gene and allow for continuous production of the therapeutic protein from muscle cells.

Byrne says he is inspired by the response he receives from the parents of the seriously ill children his treatments seek to save.

“The children and their parents feel that someone is looking after them and helping meet the need for a treatment that was not available in the past,” he says.