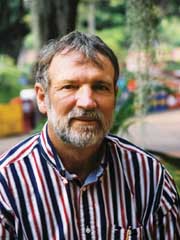 Conservative estimates indicate there are currently more than two million cocaine addicts in the United States and that as many as 25 million people have tried cocaine at least once.

Through a series of long-term studies over the past 15 years, psychology Professor Marc Branch has determined that long-term users of cocaine can exhibit varying degrees of sensitivity to the drug, with some becoming more sensitive and others less sensitive.

“This stands in marked contrast to most other abused drugs, where tolerance, that is reduced sensitivity, is the usual outcome of chronic exposure,” Branch says.

“Professor Branch’s revolutionary findings regarding the differential impact of cocaine challenge an entire generation’s conceptualizations of addictive drugs and drug abuse,” says psychology department Chair Martin Heesacker.Branch’s findings are the result of elaborate behavioral studies, often lasting two or more years, using pigeons and squirrel monkeys. Typically, he trains the animals to perform a task in exchange for a reward. Then he alters the circumstances under which the animal gets the reward. For example, sometimes a monkey will get a food pellet every one minute and sometimes every 10 times it presses a lever.

“Once the monkey is given cocaine, some activities are stimulated and others depressed, depending on how he’s learned to get the food,” Branch says. “I’m trying to find out why that happens.”

Branch says that the vast majority of people who use drugs never become addicted. His findings that the impact of cocaine depends on the behavioral demands on the subject challenge a common view of addictive drugs and drug abuse.

“Understanding the circumstances that promote tolerance, rather than assuming the outcome of all addiction is tolerance, may help future theories of drug addiction,” he says.A UF professor since 1973, Branch’s research has been continuously funded since 1974 and he recently received a five-year Senior Scientist grant from the National Institute on Drug Abuse.