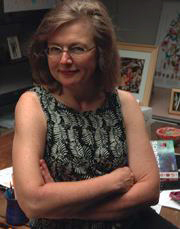 Boinski, a UF professor since 1993, has been researching the social behavior, evolution and ecology of wild monkeys in the tropics of the western hemisphere for 25 years. As one of the world’s foremost scholars on squirrel monkeys and capuchins, she tries to decipher what these animals talk about.

“What they are saying to each other is much less pure emotion than lumps of information like ‘Predators are here; I want to move the troop this way,’ or ‘Mama, where are you?’” Boinski says.

Although she has studied primates in Costa Rica, Peru, Argentina and Brazil, her current research is in the South American country of Suriname, where she has worked since 1995. “It’s an amazing place, one of the top research sites for primates in the neo-tropics,” Boinski says. “Eighty-five percent of the country is undisturbed rain forest.”

Boinski is also developing a new dimension to South American tropical forest ecology, in the Raleighvallen Forest – a nature preserve in central Suriname popular for biological fieldwork because of its high density of certain flora and fauna (such as monkeys), which makes tracking them easier.

“Dr. Boinski began to recognize what others had not seen: large man-made platform mounds, stone tools and canals carved through the jungle,” says Michael E. Moseley, a distinguished professor of anthropology at UF. “She put together a team of follow-up investigators that confirmed her supposition that this area was once home to a ‘lost civilization’ of Suriname.”