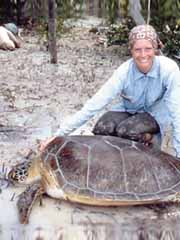 For 25 years, Bjorndal has evaluated nutrition and growth in a population of immature green turtles in the southern Bahamas. The long duration of this study has allowed her to evaluate density-dependent effects on production – a previously unstudied phenomenon which is critical to an understanding of population demography and recovery. Now, she is working with colleagues in Australia on a comparative study of nutrition and growth rates in green turtles in the Bahamas and Australia. Their initial studies have demonstrated that patterns of productivity are profoundly different between the two regions. In general, Atlantic populations have levels of productivity up to five times greater than those of Pacific populations.

In the field of nutritional ecology of herbivores, Bjorndal’s research on interactions among diet items as they pass through the digestive tract has resulted in a new paradigm by which diet selection and optimal foraging models can be evaluated. She is now focussing on the role of plant anatomical structure in diet selection by herbivores, which has been largely ignored. Bjorndal’s initial results indicate that this new approach could dramatically alter how we study the plant-animal interface and the current model of how herbivores perceive plants and assess their potential as food.