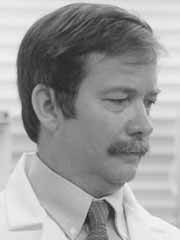 Raymond Bergeron describes his discoveries about how cells read information carried by polyamine analogues as finding a “molecular Rosetta Stone,” comparing them to the key to Egyptian hieroglyphics.

The comparison is apt, since the techniques developed over the course of two decades of research by Bergeron work for a wide variety of drugs on an equally diverse variety of illnesses.

Bergeron’s approach is deceptively simple. Polyamines are present in all human cells, and they are essential to cell growth and proliferation. The polyamine analogues Bergeron has developed gain entry to the cell because of their similarity to natural polyamines.

This has major implications if the cells being targeted are cancerous, because cancer cells have higher concentrations of and rely more on polyamines than normal cells. If their supply of polyamines is shut off, their uncontrolled growth can be stopped.

Bergeron has received 55 patents and millions of dollars in research grants from numerous public and private institutions.