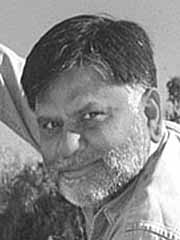 Professor of Aquatic Entomology and Ecology

Mosquitoes – people hate them. Besides being a health hazard, they cost Florida’s tourism and recreation industries millions of dollars annually. During more than 22 years at the University of Florida, Arshad Ali has become the world’s leading scientist on management of midges (blind mosquitoes) and also has substantial contributions in the area of biting mosquito control.

Ali is an aquatic entomologist and ecologist whose current research focuses on midge larval ecology for efficient management purposes. His emphasis is on modeling spatial and seasonal distributions of the larvae in Central Florida lakes based upon lake bottom topography, sediment distributions, water level, transparency, phytoplankton abundance and predation pressure from fish.

The mosquito component of Ali’s research is based primarily on the laboratory and field use of biological insecticides and insect growth regulators, generating information useful to Florida mosquito control districts and others involved in mosquito control. Ali also has extensively researched mosquito biological control agents such as Bacillus thuringiensis israelensis and Bacillus sphaericus.

Ali has received hundreds of thousands of dollars in external funding and made more than 160 local, state, national and international presentations. He has 140 published scientific papers, including several book chapters. Ali has served as a consultant to several national and international agencies, including the U.S. Fish & Wildlife Service, U.S. Environmental Protection Agency and the World Health Organization. He collaborates regularly with scientists in many countries, including Australia, China, Egypt, Italy, India and Japan.