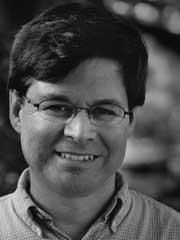 By studying the smallest particles in nature, Darin Acosta is learning more about some of the largest mysteries in the universe. For the past 10 years, Acosta’s research has delved into such phenomena as dark matter, particles with exotic properties, and forces that exist in more than three dimensions.

Some of the keys to unlocking these mysteries exist among fundamental particles at extremely high energies, which is why Acosta has dedicated his research to the highest-energy particle accelerator experiments in the world.

The Compact Muon Solenoid experiment, of which Acosta is the Deputy Coordinator for Commissioning and Run Coordination, is a large-scale project to detect and study extremely rapid proton collisions within the Large Hadron Collider, the largest and highest-energy operating particle accelerator on the planet. The collider straddles the border between France and Switzerland, about 100 meters underground. The LHC will be the leading research facility of the European Organization for Nuclear Physics, the largest physics laboratory in the world.

Acosta is a member of both the Compact Muon Solenoid Management Board and the Extended Executive Committee, which lead the 2000 physicists who are collaborating on the experiment.

In 2005 and 2006, Acosta was the co-coordinator for all of the physics groups on the Compact Muon Solenoid experiment. He led the groups to determine the parameters and performance of the experiment — their efforts culminated in the CMS Physics Technical Design Report, which Acosta edited.

In addition to his efforts in the Compact Muon Solenoid experiment, Acosta also collaborated on the physics of the Tevatron, the previous highest-energy particle accelerator, at the Fermi National Accelerator Laboratory in Batavia, Ill.According to UF physics department Chair Alan T. Dorsey, “Darin Acosta is a physicist who is among the best of his generation … in the high-energy particle physics community – a leader of an international scientific collaboration.”